Angry Lobster with Spinach is a recipe I adapted from different dishes I have tried at several restaurants.

The way it's both prepared and served when dining out requires a lot of special equipment, but after some time, I was able to figure all the ingredients and modify the recipe so it could be made at home.  Though more interestingly than its preparation (which the video shows is very interesting), people seem to want to know why it's called "Angry Lobster" and the answer is simple: it has a ton of flavor, it's a bit spicy, and it just definitely looks the part. 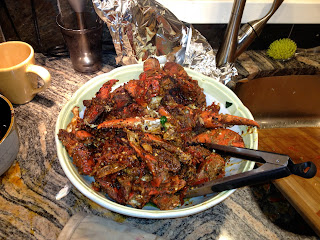 1. This is not an every day type of dish.  While it's worth making (because it's so good), it makes a mess and there a lot of ingredients.  I recommend saving it for a special occasion.  We made it most recently on New Year's Eve.
2. The lobster has to be split. The claws, the tail, and the parts the attaches the claw to the body (I don't know what those are called) need to be split long way to expose all the meat.  This needs to be done when the lobster is raw.  The splitting process will make a mess (you will see me get hit with flying lobster goo in the video).
Can you get the Fish Monger to do it for you?  I've never asked, but it you can, that's a big step towards making this easier. If you go that route, you really need to have the lobsters split within a few hours of it being cooked.  If you do it yourself, splitting should be done with a clever or a heavy knife.  Have some work gloves at the ready (one's that can be thrown out when you are done). If possible, do this outside.
3. Lobster is really cheap right now.  I bought five 1.5 pound lobsters for less that $70.
4. Kill the lobster in a humane way.  The video explains how to do that.

Read the recipe carefully before you get started.  Here it is.

Check out the video.  This is a funny one.  My friend, Greg, is our guest butcher.  He's one of those people that comes over to eat ALL the time, and always brings something nice, but is reluctant to help cook.  So... I give him the nastiest jobs.  As always, he was a good sport about it.